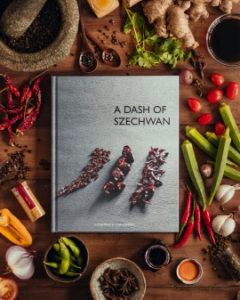 A Dash of Szechwan by Executive Chef Chen Kentaro of two-Michelin starred Shisen Hanten by Chen Kentaro placed second in the category for “Best Cookbook by a Restaurant Chef” at the 24th Gourmand World Cookbook Awards.

Founded in 1995 by Edouard Cointreau, the highly coveted Gourmand World Cookbook Awards recognises global excellence in food and wine writing, with entries from more than 200 countries every year. This year saw over 600 more entrees compared to previous years, and awards were given across various categories highlighting the best writers, publishers, and tourism promoters and providers in the food industry worldwide.

A Dash of Szechwan was shortlisted alongside seven other cookbooks by other notable chefs from across Europe, and shares runner-up position with the cookbook written by Argentinian Chef Mauro Colagreco about his restaurant, Mirazur, which ranked first in the 2019 list of The World’s 50 Best Restaurants.

Containing a collection of 50 recipes, some of them never before shared, A Dash of Szechwan features Chef Kentaro’s own take on family recipes and Shisen Hanten signature dishes. Also included are recipes originally developed by his grandfather, Chen Kenmin—lauded as the “Father of Szechwan cuisine” in Japan, and his father, Chen Kenichi—the renowned “Szechwan Sage” and longest-running Iron Chef Chinese.

Each mouth-watering recipe is accompanied by stunning food photography and personal anecdotes from Chef Kentaro. Also included within the book are recipes for stocks, sauces, and marinades that can be used for a great variety of dishes, and useful tips and visual step-by-step guides on Chef Kentaro’s very own cooking and preparation techniques. Readers can also refer to a dedicated pictured glossary for easier reference of some of the more essential and commonly mistaken ingredients featured in the cookbook.

“I started this cookbook project with the intention of promoting a greater appreciation for Szechwan flavours to an international audience through my family’s recipes,” says Chef Kentaro. “Getting recognised by the esteemed Gourmand International alongside the most celebrated names in the food industry is indeed a huge honour, for which I am most humbled and grateful. I share this accolade with the teams at Shisen Hanten and Mandarin Orchard Singapore who helped make this cookbook possible, and offer my congratulations to all nominees and winners of this year’s World Gourmand Cookbook Awards.”