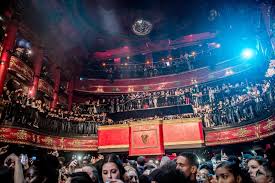 London’s one of the most historic Koko venue has been badly damaged by fire. The roof of the building, located on London’s Camden High Street, was devastated in flames, with the videos of the blaze posted on different social media platforms.

In a statement, the London Fire Brigade said that eight fire engines and around 60 firefighters tackled a fire at a nightclub under refurbishment on Camden High Street. Part of the roof was damaged by fire. The Brigade Control took twenty-two 999 calls to the visible inferno. The Station Commander Jon Lewis, who was at the scene, said that Firefighters’ quick action and hard work in the early stages meant the fire was contained to the roof and saved the rest of the building. The fire crews will remain at the scene throughout the morning.

The Brigade was called at 8.56pm and the fire was under control by 2.37am. Fire crews from Euston, Kentish Town, Islington, Soho, Holloway and surrounding fire stations are at the scene. The cause of the fire is under investigation.

The fire crews will remain at the scene throughout the day. The venue originally opened as The Camden Theatre in 1900, but gained notoriety in the 1970s as The Music Machine, where it played a pivotal role in the development of London’s punk rock scene. After a name change to The Camden Palace, it was central to the growth of the nu-romantic and rave scenes.

The venue was closed in 2004 for a six-month, multi-million-pound restoration project before being reopened under its current name. It was closed again in March 2019, with owners saying the venue was to undergo a “major state-of-the-art transformation.” It was set to reopen this spring. The artist who’ve played the venue include the Rolling Stones, The Faces, the Sex Pistols, The Clash, Iron Maiden, Coldplay, My Chemical Romance, Prince, Elton John, The Damned, Red Hot Chili Peppers, Oasis and Lady Gaga.