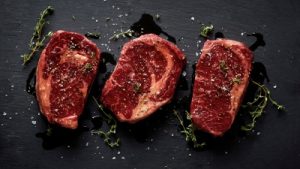 BOURBON STEAK at Four Seasons Hotel Washington, DC has been lauded for raising the “steaks” with seriously prime cuts of beef and chef-curated dishes, boasting an expansive wine cellar, and crafting an impressive array of creative cocktails – all experienced in a sophisticated and inviting contemporary-style ambiance.

In addition, for the first and only time in its 10 years – Brunch at BOURBON STEAK DC on Sunday, January 20, 2019, will be offered for USD 75 all-inclusive. It will be a showstopper on top of the abundance of food choices depicting the popular specialties: a live DJ playing popular tunes from the decade, a Bloody Mary fountain, an endless pour of Moët & Chandon Champagne and Mimosas, and a very tall ten layer birthday cake. A portion of the weekend’s proceeds will be donated to No Kid Hungry, so sipping and savouring has never tasted so worthwhile.

This rare opportunity for gastronomic time travel will be depicted by beloved bites and boozy beverages from years past and present. Reflect on cherished experiences: In a room lighted to a golden glow, the signature truffle dense rolls and salt-dusted duck fat fries tempt the palate for what is to come. The staff provides an encyclopaedic knowledge of the expertly-cooked prime cuts and encourages guests to look beyond and steaks to dishes such as the famous lobster pot pie, crispy charred octopus and the succulent hamachi crudo.

In 2018 alone, BOURBON STEAK DC continued to exceed its own ambitious standards: Head Sommelier Winn Roberton led the team in earning the only Outstanding Wine Program semi-finalist nomination in Washington, DC from the James Beard Award Foundation, as well as the coveted Restaurant Association of Metropolitan Washington Award for Wine Program of the Year. StarChefs recognized Executive Chef Drew Adams as a 2018 DC-Chesapeake Rising Star, an honour shared only with DC’s best and brightest. And, the newest addition to the team, Sarah Rosner – selected for her stellar merits – made a memorable mark in the progression of the restaurant as the first female head bartender.