Denmark and Norway authorities advisory for tourists travelling to Morocco 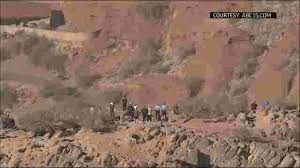 Denmark and Norway authorities have advised their citizens from hiking alone after the bodies of two female Scandinavian tourists were found in the Atlas Mountains, a popular hiking destination. They advise tourists to hike with local guides in Morocco.

The bodies of the women were found in a remote mountainous region, 10 kilometers (6.2 miles) from the village of Imlil. It is often the starting point for treks to Mount Toubkal, North Africa’s highest peak.

Investigators have video surveillance showing three suspects putting up a tent near the victims’ tent and leaving the area after the slaying.

Reports are that the lone suspect arrested in the killing of two Scandinavian tourists in Morocco’s Atlas Mountains is connected to a terrorist group.  The three other suspects are on the run.

As per the local media the suspects has links to the Islamic State group.

The two women were from Denmark and Norway.  Their bodies carried stab markings in the neck.

Morocco is generally considered safe for tourists. It is a key ally of the United States and Europe in the fight against terrorism.