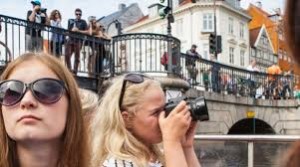 This year, Denmark is expected to welcome a record number of travellers. Its life philosophy of “hygge,” a world-famous foodie scene and a wildly popular Nordic Noir film industry attract tourists. The Danish Chamber of Commerce estimates that at the current rate, hotels in the country will tackle the influx by providing enough beds to accommodate 10 million tourists by 2021, which is almost twice the population of Denmark.

Notable recent visitors include the Nobel prize-winning economist Paul Krugman, who in a New York Times column said that Denmark is “doing a very good job of hiding” its alleged status as a “socialist hellhole.”

Regarding visiting Denmark and hotel occupancy rates already around 80 per cent, the industry is planning to increase supply considerably to accommodate a larger number of tourists. With banks and other businesses moving into cheaper accommodation, hotels are coming up in prime locations everywhere. Examples include a five-star waterfront Hilton that is due to replace the local headquarters of the Nordic’s biggest bank, Nordea. The budget chain Wakeup is also adding hundreds of rooms across the city.

There would be around 8,000 more rooms over the next four years, raising supply at a rate of around 11 percent per year. The Copenhagen tourism board, Wonderful Copenhagen, is forecasting an annual growth rate in visitors of 3.9 percent, with projected hotel stays going to around 7.58 million a year by 2021.

The expected increase in demand may fall short of supply. But Lars Ramme Nielsen, head of tourism at the Danish Chamber of Commerce, said that giving customers more choice is well worth the risk; a standard room in an average hotel today can cost more than $340 per night.

City officials opine that they want to cash in on the popularity of restaurants like Noma to attract more foodies and turn Copenhagen into the gastronomical capital of Europe.

With 350 kilometres of dedicated paths and lanes, Copenhagen is considered the most bike-friendly city in the world. About a third of its citizens cycle to work on a regular basis, and rent-a-bike businesses have gone up.