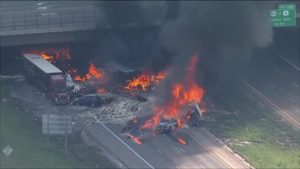 According to the Lakewood Police Department, this fiery car crash occurred on Thursday evening. It tweeted that there were “multiple” fatalities, but did not provide the exact number of people killed, saying authorities are working to put out the fire and match the victims to their vehicles. The priority now is to extinguish the fire and identify who was in each car, police said. Now, 10 injured people were transported to local hospital. The deadly fire crash started when a speeding semitrailer on the eastbound side of the highway collided with other vehicles, setting off a chain reaction and fire, Agent Ty Countryman of Lakewood Police told CNN affiliate KDVR.

The traffic of eastbound lanes of Interstate 70 near Colorado Mills Parkway was at a standstill because there was another crash farther up the freeway, police said at a news conference. The police authorities said the semi rammed into the cars stuck in the traffic from the other crash.  Countryman said that this is one of the worst accidents they have had here in the Lakewood.

The Denver West Parkway Bridge over I-70 got significant structural damage from the fire, authorities said. Both the directions of I-70 are closed overnight at the scene of the fire, police said.

The Colorado Department of Transportation closed both directions of the interstate and traffic is being diverted onto Colfax and 6th Avenue. The police and traffic officials are concerned about heat damage to the pavement and a nearby overpass.

The police said an out of control tractor trailer in the eastbound lanes of Interstate 70 careened into stopped traffic at the Denver West Colorado Mills Parkway overpass. Traffic had been backed up due to a previous crash involving a jackknifed semi and a school bus about a mile ahead.