Home » Dire drought situation in Zimbabwe, death of more 50 elephants due to starvation

Dire drought situation in Zimbabwe, death of more 50 elephants due to starvation 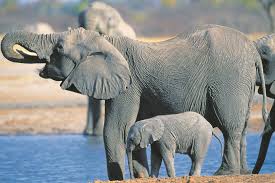 Zimbabwe is facing the worst drought in recent years and so far 55 elephants have died in Zimbabwe’s largest national park.

According to the Hwange National Park authorities lack of food and water forced the elephants to wander into the inhabited areas.

Zimparks spokesman Tinashe Farawo stated that the situation was dire and the elephants were dying from starvation and this was a big problem.

Animals died near the water holes dotting the park which was a sign that they travelled long distance in search of water.

The investigations revealed that at least 55 elephants had died from lack of food and water in the park, which holds the biggest elephant herd of 50,000 animals  which is three times the park’s capacity.

The overcrowding of elephants led to the massive destruction of vegetation in Hwange. They were straying into the villages near the game park and increasing the human-wildlife conflict.

However, the agency has plans of providing the elephant with more water by drilling more boreholes in Hwange as the existing ones had dried up. But the agency lacks funding from the government.

In the past Zimbabwe had sold baby elephants to China as it needed money for conservation in Hwange.

The wild animals in Zimbabwe were up for sale in 2016 which needed the buyers to step in and save the beasts from another devastating drought.

At a meeting in August Despite winning support from neighbours Botswana, Namibia and South Africa, Zimbabwe failed to lobby the Convention on International Trade in Endangered Species (CITES) to lift a ban on ivory trade