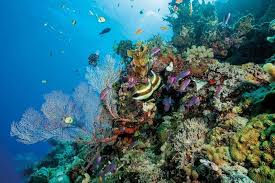 The domestic tourists’ arrivals in Great Barrier Reef have fallen dramatically. According to a new report that reveals fewer domestic visitors are heading to north Queensland to visit the natural wonder.

The report has been prepared by Centre for Tourism and Regional Opportunities at Central Queensland University.

At Cairns, the domestic visitor numbers and revenue from interstate tourism were down in 2016 and 2017. A survey of domestic tourists at Cairns airport found that, at the start of 2016, the third most common reason for visiting the tropical north city was to see the reef.

It is seen that the marine heatwave was causing the biggest coral bleaching event in history – the reef dropped to 12th on that list.

The survey conducted by CQU found that visitors to Cairns were generally aware that coral bleaching was occurring through media reports and that there was a high and increasing level of concern about the bleaching events.

The Great Barrier Reef, which is the largest living structure on the planet, features heavily in Australian tourism promotions.

It remains the top reason for international tourists to visit Cairns. The report says the likelihood of further and more severe coral bleaching events was “alarming” for tourism businesses in areas such as Cairns, Port Douglas and the Whitsundays.