More than dozen injured due to train collision in Hyderabad, India 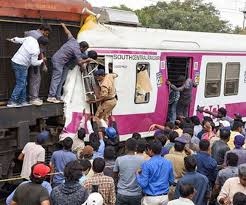 After collision three coaches of the Lingampalli-Falaknuma local train and four coaches of the Kurnool City-Secunderabad Hundry Express got derailed.

The incident took place in Hyderabad on Monday which injured a least a dozen people and injured many after the two passenger trains collided.

A Multi-Modal Transport System (MMTS) train rammed into an Intercity Express which was waiting at the platform which led to the accident.

On platform No 2 in the Kacheguda railway station a green signal was given to arrive at the platform. Just a few minutes away from the platform the MMTS train which was slowing down while approaching the railway station and rammed into the Inter-City Express as mentioned by the South Central railway official.

The train driver of MMTS has been seriously injured as he was stuck in the engine for some time after the collision.

To carry out the rescue operations the police personnel and railway staff rushed to the site while the injured are being provided with first aid and are shifted to the hospital.