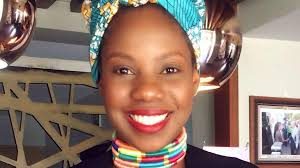 Bernadette Konjalo passed away while saving people during the Islamist extremists coordinated assault on the Dusit D2 compound in Nairobi. The attack at 14 Riverside office left 21 people dead. She had a 10 year experience in the hotel industry.

Ms Konjalo, the revenue director at DusitD2 Hotel, died while helping colleagues and guests to safety after the first gunshots rent the air.

Her cousin Camillus tried calling her but both her lines were switched off. They proceeded to the scene but could not get any information on whether she was among those who escaped or those rescued in the beginning. She was identified by her birth mark in the mortuary.

She was fondly referred to as Titi. She was a people-person and was paying her cousins’ and other relatives’ school fees as well as supporting her nuclear family.

The attackers had advanced towards the hotel’s entrance where she was standing guiding people.  She quickly retreated inside with a group of colleagues. She was shot on her left hand. She tried to guide people instead of escaping herself.

Rest in peace Queen B. Heaven just gained an angel.