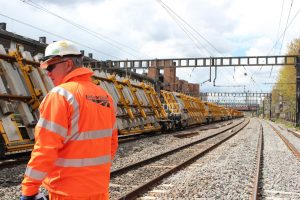 Network Rail engineers will be working around-the-clock this Easter bank holiday to deliver more than £18m of improvements across Scotland’s railway.

Over 1,500 engineers will work more than 20,000 hours on projects across the country, including major investments in Aberdeen and Glasgow.

At Shawfield in Glasgow, signalling and track upgrades worth £4m will be delivered on the west coast main line as engineers renew sets of points (pieces of track which move to transfer trains from one line to another).

Further south on the west coast main line, which links Glasgow Central to London Euston, engineers will be working to renew tracks and a level crossing and to improve under-line drainage between Beattock and Abington in South Lanarkshire.

In the north east, engineers will be replacing or refurbishing seven bridges and improving drainage as part of plans to double-track the line between Aberdeen and Inverurie later this summer.

The programme of work this Easter is just the start of Network Rail’s five-year, multi-billion-pound investment in the rail network which will improve passenger journeys and allow more trains to use the network.

Most of the country’s services are unaffected by this weekend’s investment programme, but some routes, particularly in Lanarkshire and the north east, will see significant changes.

“It will help to improve reliability on the west coast main line – one of Europe’s busiest rail routes – and prepare the way for a significant improvement in services for customers in the north east of the country.

“The work we are undertaking this weekend will help to provide a more modern and more reliable railway.

“We understand the inconvenience this work will cause some customers, but such a significant investment cannot be delivered without temporary disruption and every effort has been made to reduce the impact of our activities as much as possible.”