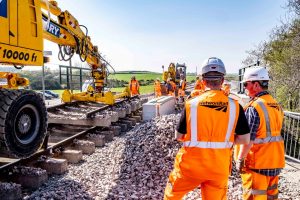 Thousands of rail engineers worked around-the-clock between Friday night and the early hours of Tuesday morning to deliver projects across the country.

In Glasgow, signalling and track upgrades worth £4m were completed at Shawfield junction, on the west coast main line, as engineers renewed six sets of points (pieces of track which move to transfer trains from one line to another).

The upgrade will improve the reliability of the line and will mean the junction doesn’t need renewed for another 30 years.

Over the weekend, engineers cut up and removed the old track layout, before new track sections, which were delivered in 50 pre-assembled panels to speed up the job, were laid.

In the north east, engineers replaced or refurbished seven bridges on the line between Aberdeen and Inverness.

Part of plans to double-track between Aberdeen and Inverurie later this summer, the Easter engineering works created the extra space needed to lay the new infrastructure by widening the bridges.

Further south, engineers also renewed tracks and a level crossing between Beattock and Abington in South Lanarkshire, on the west coast main line.

Liam Sumpter, Chief Operating Officer for Network Rail Scotland, said: “We’d like to thank both passengers and our lineside neighbours for their patience while this vital investment has been taking place.

“We understand the impact our engineering works can have on customers’ plans at bank holidays and we always work hard to keep disruption to a minimum.

“The projects we have delivered over Easter are a significant investment in the long-term future of our railway.”