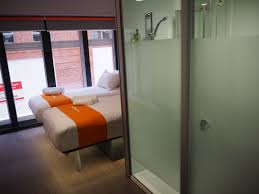 Budget hospitality brand, EasyHotel has said that it has “continued to outperform its competitors” in a market where political and economic uncertainty continues to affect consumer confidence. The total system sales for the group increased by 24% to £19.9m, according to a trading update for the company for the six months to 31 March 2019.

While revenue per available room (revpar) increased by 5.4% across the group’s 11 owned hotels, it was down by 3.5% for the 25 franchised properties.

The update highlighted that the relatively strong market demand in London was off-set by a weaker regional market performance, with a marked deterioration in revpar across the UK in Q2 as compared with Q1. As a result, the short-term market outlook remains uncertain.

The hotel openings during the period included one owned property in Ipswich and two franchised properties in Lisbon and Bernkastel-Kues, Germany. Meanwhile, two new owned hotels are due to launch in June in Milton Keynes (124 bedrooms) and Old Street, London (89 bedrooms).

Guy Parsons, chief executive of EasyHotel, said that the ongoing political and economic uncertainty continues to impact consumer confidence as demonstrated by weakening quarter-on-quarter demand across the market, both in the United Kingdom and in Europe. However, their actions to drive occupancy, including working closely with online travel agents to increase brand awareness, has meant that EasyHotel has continued to outperform its competitors as consumers seek out the best value for money.