Edinburgh Airport gets an impetus with new Beijing route announcement 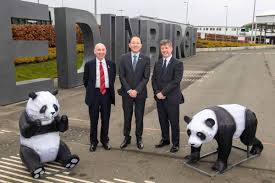 This June, the first ever direct flights from Scotland to China will start on after the announcement was made in China this morning.

The declaration will see Hainan Airlines flights to Beijing Capital International Airport commencing from June 12. It will be flying 4 weekly on an Airbus A330-300.

It highlights the successful culmination of Edinburgh Airport’s joint association with colleagues in China to attract these routes to Scotland in a way that will bring profit the economy, culture and tourism of the country.

To quote Chief Executive of Edinburgh, Gordon Dewar, “This is a fantastic day for Edinburgh Airport and for Scotland as we connect Scotland and China for the first time. We are two countries steeped in history and rich in culture, offering new destinations for people from both countries to visit and explore.

“Edinburgh is second only to London as the most popular UK destination for Chinese tourists, and we have worked incredibly hard with partners across the city and country to get to this point.”

The sum up of three years of work, Mr Dewar added that relationship building and working with partners in both countries has been important to the announcement:

“A number of organisations shared our vision in attracting this route to Scotland, and it’s testament to our working together with both UK and Scottish governments and bodies such as Scottish Enterprise, Visit Scotland, Laings the Jeweller and Edinburgh Hoteliers Association among others that we’ve finally achieved it. Edinburgh Tourism Action Group’s China Ready programme has also prepared the city for this growing market, so we are in good shape.”