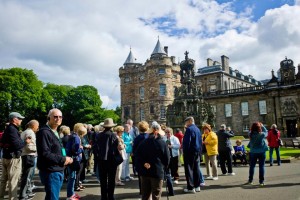 Overtourism is a serious concern in the travel industry Edinburgh is its latest prey. This pristine destination is now coping up with the mass influx of visitors and has claimed that the city is becoming over crowded specially during the festival dates.  The increasing problems with the tourism “bottlenecks” are hampering the life of the residents there.

Edinburgh’s tourism industry is believed to support 34,800 jobs and is worth around £1.46 billion to the city’s economy, and visitor numbers have risen by more than half a million in the past five years to 3.85 million. This Scottish capital has joined the league of Venice and Barcelona which passed a couple of regulations in order to protect the city from overcrowding and maintaining the sustainable tourism structure.

Donald Wilson, Edinburgh city council’s culture leader, said that plans to monitor the impact of the festivals will tackle how to “manage the success” of the industry.

Although increased in the tourism is a positive thing but that also implies higher pressure on the city infrastructure. The city is thus, now seeking ways to rule out the growing pressure on the city’s roads, pavements and public transport network. It is essential to get the situation under control as it is pursuing a target of boosting visitor numbers by a further third by 2020 and is expecting to generate additional revenue worth £485 million.

One idea mooted is for the city’s festivals calendar to be more spread out during the year to allow better management of tourist numbers. Robin Worsnop, chair of the Edinburgh Tourism Action Group said that Edinburgh has grown to become one of the world’s most appealing visitor destinations. As the place has become a global choice for vacation, the city needs to ensure ways to balance the tourism and the normal course of the life for the residents.