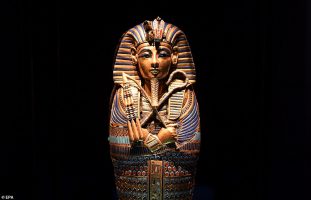 The exhibition opened in Chelsea Gallery of London features Egyptian King’s rare possessions including over 150 displays from Tutankhamun’s tomb. The tomb was discovered by the archaeologist Howard Carter and Lord Carnarvon in 1922.

Tutankhamun died at 19, having ascended the throne in just 9 years of age and was buried with most extraordinary artefacts, supposed to help him in his afterlife.

Earlier in the 1970s, these artefacts were displayed in London. More than 1.5 million visitors turned up in the exhibition during that time.

The exhibits will be displayed until May 2020 before they are set to return to Egypt forever and kept in a permanent museum there. The seven-month exhibit showcases artefacts from the tomb which have never left Egypt before.

Egyptologist Tarek El Awady is the curator of the exhibition.

The exhibition has been touted as Britain’s most expensive exhibition as the adult ticket cost up to €37.50 for peak times. A family of three will have to pay €100 for the experience.

One of the exhibits displayed is a gold inlaid coffin of Tutankhamun, which dates back to 1336-1326 BC. There is also a glided wooden ostrich hunt fan on display beside a mural containing hieroglyphics taken from the womb, first discovered by British explorers in 1922. The exhibits also include everyday objects that the king would have wanted to take with him into the afterlife.

The exhibition, however, won’t be featuring the iconic death mask worn by Tutankhamun. It remains in Egypt because it has become too fragile.

Earlier, the exhibition managed to raise €8 million in its second leg in Paris, which is going to be used in completing the museum in Egypt, where the exhibits will be finally kept.

The 10-stage world exhibit is commemorating the 100th anniversary of the discovery of Tutankhamun’s tomb.