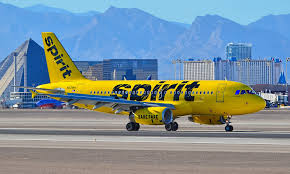 Eight people were taken to the hospital after a Spirit Airlines flight from McCarran International Airport to Minneapolis was grounded. A strange odour was detected onboard so the  flight from Las Vegas had to return to the gate before takeoff.

A Spirit spokesperson said that the smell onboard flight 170 “resembled oil”. The airlines confirmed that 15 people were examined by paramedics, one passenger, six crew members and one medical respondent were transported to the hospital.

For maintenance checks the Airbus A321 aircraft has since been removed from service while the passengers are rebooked on other flights. They were provided with travel and food vouchers  and refunds.

There were similar instances on Spirit Airlines earlier, on May 5 a service from Las Vegas to Tampa, Florida was diverted to Dallas-Fort Worth International Airport.

Stephen Schuler, director of communications for Spirit said that Spirit flight 1128 from Las Vegas to Tampa landed safely in Dallas following reports of an odour onboard.

The crew decided to divert to DFW for full mechanical inspection out of an abundance of caution.

They investigated the source of the smell and we had placed guests on another plane bound for Tampa.

Due to fumes in the cabin and cockpit of the aircraft on May 3, a Spirit flight to Denver had to return to Los Angeles International Airport. It was reported that a passenger was hospitalized and the aircraft was removed from services for checks.