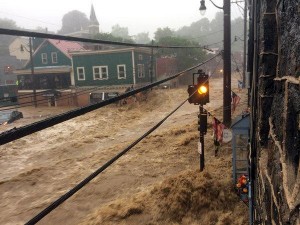 After heavy torrential downpour in Maryland which caused floods which battered the lives and declared as a state of emergency.

The heavy rain caused floods that ripped buildings from their foundations and hurled cars downs streets.

The videos of devastation were posted online from social media users in Ellicott City, where river brown water crashed through the streets.

The governor of Maryland, Larry Hogan declared as a “state of emergency” in the community over the flash floods. Ellicott City is about 13 miles west of Baltimore.

The government and civic authorities had no immediate reports of injuries or deaths, but said their information was preliminary.

There are water had subsided and rescue officials were walking around the downtown area while making sure people evacuated.

The National Weather Service said a flash flood warning has been issued for the area for the rest of Sunday evening, stating it as an “extremely dangerous situation” and urging motorists not to attempt to navigate flooded roads.

The Howard County Department of Fire and Rescue Services tweeted that multiple rescues were carried out, and rescue swimmers were called in to help. The department also said swift water units from as far away as northern Virginia were coming to help.

The local authorities compared the inundation with a 2016 flash flood that killed two people.

Meanwhile, some roads were also flooded in neighboring Baltimore County. A spokeswoman in Baltimore County said the fire department has received dozens of calls about cars stuck in high water and flooded basements.