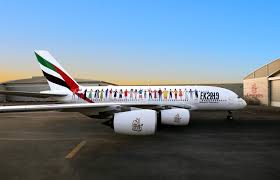 The passenger numbers are in for Emirates for the just-concluded 2019. The airline carried 58 million passengers for the year, which is actually down by a full million from 2018’s 59 million.

The drop in passenger numbers is solely attributed to a temporary closure of Dubai International Airport’s runway.

During its closure, the runway had undergone a complete refurbishment. The Southern Runway is DXB’s longer runway with a length of 4,500 meters and a width of 60 meters. As part of its upgrade, the runway was resurfaced and its ground lighting and supporting infrastructure were replaced.

It was a massive undertaking that included  “the placement of approximately 60,000 tonnes of asphalt and 8,000m3 of concrete to strengthen and resurface the runway and the adjacent taxiways”.

The runway closure at DXB affected other airlines as well. For April and May, multiple airlines operating at Dubai International also had to reduce their capacity as they would have also utilized the southern runway.

Paul Griffiths, CEO of Dubai Airports, said earlier that the upgrade is “absolutely necessary” in order to enhance safety, capacity, and pave the way for more growth. Additionally, Gulf News reported that airport representatives commented that May was typically “the quietest period in terms of traffic,” and was anticipated to be especially quiet in 2019 as it coincided with Ramadan when travel demand is lower.

An official statement from Emirates on Tuesday noted that 2019 was “a year of recalibration” for its fleet and network plans. In fact, Emirates made a lot of changes last year to better position it for future growth. Changes include:

• Emirates cutting its Airbus A380 orders in February. Airbus’ A380 program was so dependent on Emirates that the cancellation forced it to end the production altogether.

• For its massive widebody fleet, Emirates is continuing diversification and expansion. The airline signed $24.8 billion USD worth of deals at the 2019 Dubai Air Show. The airline intends to receive 50 Airbus A350s and 30 Boeing 787 jets.

• An increase in the partnership and relationship with budget airline flydubai.

• The signing of 26 code-share partnerships. The most recent was with Indian budget airline SpiceJet. In 2019, other code-shares signed included China Southern Airlines, Africa World Airlines, LATAM, and Mexico’s Interjet.

• The announcement that Premium Economy class will be introduced in 2020.

With the runway closure being a one-off, unavoidable and necessary operation, we should see numbers bounce back in 2020. As you can see above, Emirates has done a lot of reconfiguration and recalibration of its operations in the last year and it leaves us with a lot of excitement and anticipation for 2020.

“In 2020, we’ll continue to leverage our partnerships to provide even more connectivity and value for our customers. And we look forward to welcoming the world to Dubai for Expo 2020, where we will showcase the future of aviation at the Emirates pavilion.” -Tim Clark, President, Emirates