Home » Emirates Renews Its Support to Mauritius and Seychelles

Emirates Renews Its Support to Mauritius and Seychelles 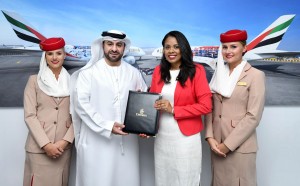 Emirates has announced its renewed support to Mauritius and the Seychelles by extending its global marketing agreement with the respective Tourism Boards of the two countries.

A Memorandum of Understanding was signed at the 2018 Arabian Travel Market, by Orhan Abbas, Emirates’ Senior Vice President, Commercial Operations for Africa and Sherin Francis, Chief Executive Officer of the Seychelles Tourism Board and Devi Seewooruthun, Permanent Secretary of the Ministry of Tourism, in the presence of the Minister of Tourism of the Republic of Mauritius, Honourable Anil Gayan.

“Seychelles and Mauritius have always been important destinations on the Emirates network, and we are pleased to be continuing our long standing commitment with them. We will look to develop a series of joint activities together with the Seychelles Tourism Board and the Mauritius Tourism Promotion Authority, to highlight the destinations and their appeal throughout our network”, stated Orhan Abbas, Emirates’ Senior Vice President, Commercial Operations for Africa.

“We look forward to strengthen our support to these two beautiful island nations. Our success on these routes is the result of relentless efforts by Emirates, the Seychelles Tourism Board and the Mauritius Tourism Promotion Authority and we truly believe that this partnership is beneficial to all parties”, he added.

“The partnership between Mauritius and Emirates has stood the test of time. The signing of this fresh MOU is a strong signal to strengthening that partnership even more in the years to come”, stated Honourable Anil Gayan, Minister of Tourism, Republic of Mauritius.

“The STB is very happy indeed to be renewing its partnership with Emirates airline. STB recognises the pivotal role Emirates airline has played in developing the Seychelles tourism industry over the past decade. Through the signing of the MOU, the destination is again reiterating its commitment and supports toward the airline to ensure it keeps on serving the destination”, said Sherin Francis, Chief Executive Officer of the Seychelles Tourism Board.

The Agreement will see marketing activities such as attendance of tourism trade shows and fairs, trade familiarisation trips, product presentations and workshops, amongst others, be undertaken jointly by Emirates and the Tourism Boards.

In June 2015, Emirates increased its capacity to the Indian Ocean Island of Seychelles, when it switched from the Airbus 330-200 used on one of the two daily services to a larger Boeing 777-300ER. The introduction of the Emirates Boeing 777-300ER increased the overall capacity on the route by 1722 seats per week and made the route an all-Boeing 777 operation.

Emirates started operations to the Mauritius in September 2002 with three weekly flights. Its daily A380 service was launched in December 2013 and less than a year later the airline introduced a double-daily service was introduced in October 2014, following a strong demand for Emirates’ flagship aircraft on this route.

Emirates has a fleet of 269 aircraft and flies to 159 destinations in 85 countries and territories across six continents.