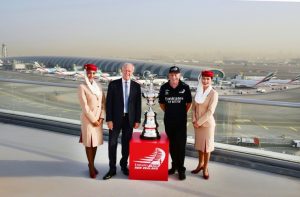 Emirates is pleased to announce its reaffirmed commitment to Emirates Team New Zealand through the renewal of their contract for the 36th America’s Cup.

The award-winning airline will also be the ‘Official Airline’ partner of the 36th America’s Cup presented by Prada which includes the America’s Cup World Series (ACWS), sponsoring all preliminary regattas leading up to the main event in 2021. In addition, Emirates has signed up to be the ‘Presenting Partner’ of the ACWS event in Portsmouth, United Kingdom.

Emirates joined the team as its naming sponsor in 2004 when it began its quest to bring the America’s Cup back to New Zealand. It remained a stoic supporter through two close Challenges in 2007 in Valencia and 2013 in San Francisco before Emirates Team New Zealand proudly lifted the ‘Auld Mug’ again in Bermuda in 2017. Now, as The Defender again they have returned the 36th edition of the America’s Cup back to Auckland where it will be raced in March 2021.

“We have enjoyed a memorable journey with Emirates Team New Zealand since 2004, and the response and support we have received since has been tremendous. Emirates Team New Zealand is dedicated and ambitious, mirroring Emirates’ commitment to deliver game-changing and world-class experiences to its customers. We will continue to build our partnership with the team as they journey towards the 36th America’s Cup,” said Sir Tim Clark, President of Emirates airline.

“Emirates is also proud to expand our involvement in world-class sailing by sponsoring the 36th America’s Cup which includes the America’s Cup World Series as well as becoming the official ‘Presenting Partner’ of the ACWS event in Portsmouth. The America’s Cup has grown to become one of the world’s greatest major sporting events and we look forward to using this great platform to share and grow the passion for sailing as a sport and bring communities together,” he added.

Emirates has always been a staunch sponsor of the team through our highs and lows since 2004. So having them so entwined in both the team and event adds a great element of familiarity and solidarity going into our Defence in 2021 which is going to be a fantastic event on our home waters of Auckland.”

David Williams, Chief Executive of Portsmouth City Council said: “We’re delighted that Portsmouth will be part of the prestigious Emirates America’s Cup World Series yacht racing again in June next year. America’s Cup events attract a world-wide audience and we’re looking forward to the city’s waterfront being centre stage for this esteemed international sailing event. The event is also significant for raising the profile of Portsmouth and its marine and maritime businesses across the globe. Portsmouth is home to INEOS TEAM UK, led by Sir Ben Ainslie, and I am sure fans will show huge support to the British team when they race in front of their home crowd on the Solent in their quest to challenge for the 36th America’s Cup. When Portsmouth hosted the events in 2015 and 2016, 250,000 spectators enjoyed the spectacle, the events delivered £15.6m in media value and £38.7m in economic benefit.”

Emirates’ sponsorship of Emirates Team New Zealand dates back to 2004 and has helped bring the Emirates brand to many parts of the world. The team has won the America’s Cup a number of times clinching the trophy in 1995 and successfully defending the title in 2000 and 2017.

The 2020 America’s Cup World Series will see all participating teams, including Emirates Team New Zealand, race their AC75 America’s Cup class yachts. The first ACWS event will take place in Cagliari, Sardinia from April 23 to 26, 2020, the second in Portsmouth, then concluding in Auckland as part of the Christmas Race from December 17-20. The ACWS is then followed by the Prada Cup Challenger Selection Series which will determine which foreign yacht club will take on the Defender of the America’s Cup, Emirates Team New Zealand, in the 36th America’s Cup Match from 6 to 21 March 2021 in Auckland.

Offering flights to more than 150 destinations, including daily services to Christchurch from Sydney, Emirates now operates 21 return flights per week from New Zealand to Dubai and beyond, with the addition of the latest service, the Auckland-Bali-Dubai route.