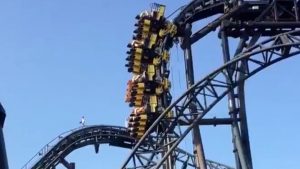 England’s Alton Towers amusement park suddenly stopped in midair and the passengers on a ride got an extreme frightening experience.

When the occupants were around 100 feet high the coaster called the Smiler had stalled Tuesday evening. For about 20 minutes the malfunction lasted and the stranded riders were completely on a fully vertical slope and faced the sky.

Dylen Fryers, who got stuck on the coaster said that they did not know what had happened and they were not moving. As two carriages were going around the ride at the same time he was worried that the other might just collide with them.

Some of the park goers took to Twitter and posted photos and videos of the incident. Some of the riders were heard screaming as they waited to be rescued.

Jamie McKay, who witnessed the incident said that it was scary to hear them all screaming as they were helpless up there.

The theme park had apologized for the incident and mentioned that it was offering free tickets as compensation for those who got stuck.

In 2015 sixteen people were injured in a crash on the ride, two of them lost a leg and due to the incident the park had earned more than $5 million fine.

The Smiler was reopened in 2016 by the Alton Towers located in Staffordshire stating that it had safety additions on the check .There are 14 loops in total in the coaster.