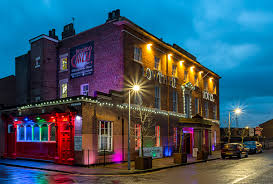 The historic Grade-II listed hotel, considered as the oldest one in England has gone on sale with a £1.4million price tag.

The Lowther Hotel in Goole, East Yorkshire, was built in 1824 by bridge maker Sir Edward Banks and overlooks the River Ouse. It claimed the title of England’s oldest hotel after its predecessor – the Royal Clarence Hotel in Exeter – was destroyed by a fire in 2016.

The nearby Drake pub is also included as part of the sale. The owners Howard and Julie Duckworth, who bought the Georgian hotel in 2008 and restored it to its former glory, have now decided to sell up and retire.

Howard said that It was originally built to be the home of visiting architects and engineers who were working on the docks, which are just across the road. The hotel has exactly the same footprint as it had when it was built, so if your great-great-grandmother or father came to see it today, they would still recognise it. In a statement regarding the sale, the couple said: ‘After much soul searching, the family have decided that with Howard’s illness and Julie being past retirement age, it has become evident over the last year that The Lowther and The Drake deserve someone else with the passion and drive to take them forward to the next level.

The cobbled courtyard to the rear of the hotel, which has been used for open air events, leads to the Coach House, a bar and events space often utilised for private parties, the Coco Havana Bar, and the JD Grill diner and takeaway.

The Drake operates as a pub and sports bar and offers accommodation for 10 guest rooms.

The Drake was originally built as a bank in the 1880s, described as ‘the most prestigious banking hall in all of England’, and was owned by Barclays, before falling into disrepair in recent years.