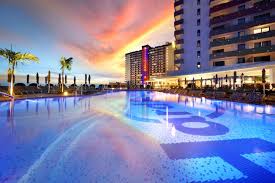 Hard Rock Hotel Tenerife is set to offer exciting activities for a memorable Christmas vacation with family and friends. Enjoy the Christmas spirit which is the most magical time of the year in the best setting of the Canary Islands. Hard Rock Hotel Tenerife has arranged special set of experiences this festive season, from the visit of Santa Claus driving a Harley-Davidson, to incredible gala dinners, themed performances and a legendary New Year’s Eve party that will change the island’s rhythm forever.

The Christmas tree is one of the hallmarks of every home and on 7th December, the hotel will celebrate the long-awaited ceremony of lighting the tree along with performances by different artists, thus kicking off the beginning of this very special time of the year. Rock star guests particularly children can enjoy activities at the Hard Rock Roxity Kids Club on 24th December wherein everything will revolve around “Viva la Banda” with rock makeup workshops, costumes, a children’s show with the “Roxstars” and even an aftershow party with a carol singer.

Gastronomy is paramount to Christmas and all three à la carte restaurants at Hard Rock Hotel Tenerife will offer exclusive gala dinners on Christmas Eve with a dining experience inspired by the World Luxury Awards. In addition to this, the Sessions restaurant will offer a special buffet service too. The arrival of Santa Claus is one of the most eagerly awaited moments of Christmas. Expect him to make a stellar entry in a Harley Davidson, loaded with gifts to spread Christmas cheer among youngsters and adults. Christmas cookies, acrobatic performances, live music and many more surprises await one and all at Hard Rock Hotel Tenerife this festive season.

Conclude your evening at Hard Rock Hotel Tenerife with a buffet dinner highlighting a variety of pokes, sushi and other delicious preparations.