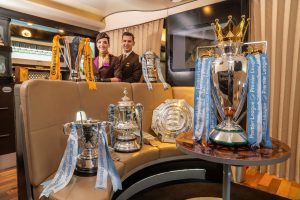 Etihad Airways, the national airline of the UAE, and official partner of the Manchester City Football Club Trophy Tour celebrated the club’s record-breaking 2018/2019 football season with a display of trophies at its Abu Dhabi headquarters for employees to enjoy.

In celebration of Manchester City Football Club (MCFC) making history as the first English football club to lift six trophies in the same season, the trophies were also displayed in the airline’s luxurious Lobby on the upper deck of an Airbus A380.