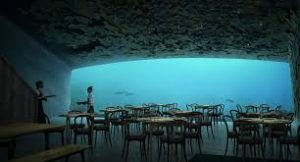 Under, which also means “wonder” in Norwegian, is located on the country’s southern tip, and is submerged in the North Sea.

Submerged in the North Sea is the new underwater restaurant, Under, which also means ‘wonder’ in Norwegian was launched on 20 March.

Located on the country’s southern tip it is designed by Snoehetta, a Norwegian architecture firm which worked on the September 11 Memorial Museum in New York.

So far, the restaurants had 7,000 customers bookings, paying guests will have access from April, although it is now open to friends and family of the owners.

In the underwater dining space there’s room for around 40 guests, providing ocean views through a giant glass window at the back.

The stark design, wooden walls, ceiling tables and chairs, concrete staircase and neutral flooring  with a good focus on the fish.

There is a full 18-course tasting menu and drinks but no casual eatery.

Snoehetta’s founder Kjetil Traedal Thorsen  said that fascination is about the movement from above water to underwater through the building.  The big window exposed the underwater like a real thing.

The building was built to withstand extreme weather, including the ‘wave of the century’.Its exterior has a sloping wood and concrete cuboid that slants into the ocean , it looks are modern, aesthetic  and is accessible through a steel bridge.

Two Ubostad brothers own Under, they also have a nearby hotel. The brother hope to attract around 12,000 diners each year.

Last year in Maldives the first underwater hotel room was opened in Maldives.

Beneath the Indian Ocean the Muraka suite at Conrad Maldives Rangali Island sits. It is 16.4 ft deep and cost approximately $15m to build.