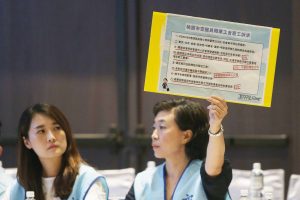 After the latest round of negotiations with airline management reaching a deadlock the EVA Air cabin crew went on a strike over pay and working conditions.

Taiwan’s second-largest airline strike has left thousands of passengers looking for alternative transport and so far more than 100 flights were cancelled affecting 20,000 passengers on the first three days of the strike starting on Thursday afternoon.

The domestic operations were not affected and the airline is known to operate 80 international flights.To further press their demands around 100 union members had stages a sit-in outside the airline’s suburban Taipei headquarters on Thursday night.

The airline mentioned on its Twitter feed that it was working closely with concerned authorities, fellow airlines and travel agencies to arrange alternative flights for passengers and to all they can to reduce the delays.

The airline said that the ultimate labor action will be impacting inconvenience to their passengers and flight attendants’ fellow employees and the travel industry.

Passengers could call the airline’s reservation center and updates were published on a strike response website.

A raise in daily allowance was demanded by the Union members and to end the practice where non-union members enjoy the same benefits as members.

As per the management the daily allowances were already higher than those offered by the competitors and barring non-union members who do the same work from enjoying equal benefits would harm safety and morale.

China Airlines went on a strike for seven days over benefits and working conditions before coming to an agreement with the mediation of the transport and labor minister.