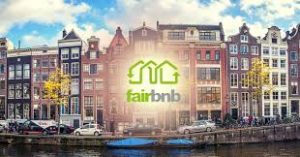 Over the last few years, Airbnb and its competitors have been accused of making housing unaffordable, of removing homes from the long-term rental market, and eviscerating the character of popular neighbourhoods through displacement and overexploitation. In an era marked by the effects of a housing shortage, it may seem that vacation rentals stand at odds with the solutions cities and residents are searching for.

But does the business of short-stay rentals have to be so ethically fraught? An ambitious project based in Amsterdam says no.

It’s called Fairbnb, and it’s trying to refashion the home-sharing model so that short-stay apartment rentals can enrich the amenities and housing choices of the communities that host them.

“For a long time, the social impact of traveling was rarely taken into consideration—because at first with vacation apartments, people didn’t feel it,” Sito Veracruz, a co-founder of Fairbnb, tells CityLab. “We are now reckoning with the damaging impact of tourism on communities, not just because of the industry’s growth, but because of its huge expansion into residential areas.”

The project, if successful, could provide a sustainable alternative in a sector where, as Fairbnb’s own promotional material notes, “the promise of ‘home-sharing’ has turned into ‘home-stripping’. Fairbnb has been building this alternative for three years now. It already has co-op members in Italy, Spain, the Netherlands, and Lithuania, and has spent time consulting with communities in cities across Europe, including Venice, Bologna, and Barcelona.

While it is only just preparing to accept registrations from hosts, its community-building exercises have attracted more than 700 people who are ready to list their homes. As its launch date nears, Fairbnb is now going through a crowdfunding push, mainly to fast-track technology development, such as a mobile counterpart to its upcoming online site.
It comes at a moment when people are hungry for an alternative.

Fairbnb’s model diverges from the standard model in several key ways. Like other home-share sites, it plans to levy a commission on bookings (in Fairbnb’s case, of 15 percent, which is broadly similar to Airbnb). Half of this money would be fed back into the local community where a unit is rented out.

That money would be used to fund projects chosen in consultation with the community itself. These might include non-commercial meeting spaces, community centers, or (if the network can generate enough money) social housing. Fairbnb guests would be able to choose the community project that would benefit from their stay. All of those projects will have applied to, and been vetted by, Fairbnb. Guests may even be able to visit their choice of project during their stay.

Neighbourhoods that host listings could thus see home-sharing feed investment directly back into their communities, instead of seeing the profits siphoned off by absentee landlords and a distant corporation.

This sounds promising. Even this more sustainable model could do cities harm, however, if the cities themselves can’t properly control where and in what volume short-stay apartments are allowed to operate. Aware of this, Fairbnb is making a public commitment to follow every local law on vacation apartments to the letter, and to share all relevant data with local authorities. This would also mean a degree of self-policing in places where local monitoring is underpowered.

“We only have legal apartments,” Veracruz said, “and in places where laws are lax, we ourselves have to check the potential impact of a listing. In places with no regulation, we as experts will suggest some rules, but neighbors will also be able to suggest some policies—as has happened during our consultation in Venice, where our policy [for future rentals] is stricter than the municipality requires.”

This approach in itself would make a huge difference, as Airbnb’s current procedures seem to do little to prevent abuse. A recent Dutch report found that 41 percent of Amsterdam’s Airbnb listings hosted guests for more than 60 nights, breaching the citywide cap in place last year (which has since fallen to 30 nights). Barcelona, meanwhile, has had some success reining in the home-sharing sector with a licensing system and action taken against illegal lettings, but only got Airbnb to share its data fully after several years of levying ever-higher fines against the company. For an operator to fully cooperate from the start in sharing data would make things far easier for municipalities to control.

There is of course the risk that, as many cities mobilize against Airbnb, a sustainable alternative could find itself caught in the crossfire. Veracruz is cautiously optimistic that tight restrictions on Airbnb wouldn’t stand in his way.

“We don’t ask cities for any special preference or favour, but so far governments are fine with us, and we are already signing agreements with municipalities in Amsterdam, Venice, and Barcelona,” he said. “We are complying with the regulations, and are being as transparent as they require. I understand that they can’t or won’t promote us, but, frankly, we are the best guys they have seen in ages.”

To assume that a private company would adopt and stick to this kind of good conduct simply for the public good might seem naïve, but Fairbnb isn’t actually a private company. It’s a non-profit co-operative, owned and run by workers on capped salaries, with ready-to-go plans for a co-governance system—one developed over three years of community consultation across European cities—in which local communities co-pilot its running, written into its DNA.