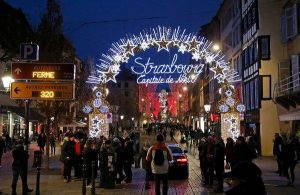 The incident of shooting near world-famous Christmas market in French city of Strasbourg left four people dead and about 11 wounded. It led to a broad lockdown and a search for the suspected gunman.

The suspect was later identified as Chérif Chekatt, 29. He was killed in the Neudorf neighborhood of Strasbourg ending a two-day manhunt that involved more than 700 members of the security forces.

The motive for the bloodshed is not clear but terrorism investigation was opened. European Parliament in Strasbourg was locked after the incident.

The market was the nucleus of an al Qaida-linked plot in 2000. The prefect of the Strasbourg region said the suspect was previously flagged as a possible extremist.

According to interior minister Christophe Castaner, the gunman has been identified and has a criminal record. Explosive materials were found in the suspect’s home.

French military spokesman Col. Patrik Steiger said that the shooter did not aim for the soldiers patrolling in and around the Christmas market. He targeted the civilians instead.

President Emmanuel Macron adjourned a meeting at the presidential palace Tuesday night to monitor the emergency as per his office. It reflects the gravity of the attack.

Witnesses said that they heard gunshots.  Police officers were shouting – ordering people to stay indoors.  They were saying ‘Get inside!’ and ‘Put your hands on your head.’

In multiple neighborhoods of Strasbourg, the French Interior Ministry urged the public to remain indoors soon after the incident.

Strasbourg’s Christmas market is set up around the city’s cathedral during the Christmas season. It is a popular gathering place. However, the dazzling lights of the market were juxtaposed with police officers, police vehicles and barricades. The Christmas Market in Strasbourg, France, reopened next day.