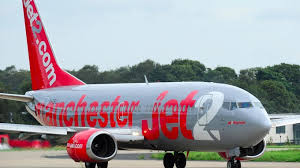 A Jet2 flight had to be escorted by a sonic boom and two Royal Air Force fighter planes back to London’s Stansted Airport Saturday after a passenger became disruptive and tried to open the door mid-air.

A pair of RAF Typhoons were scrambled to intercept a flight bound for Dalaman, Turkey, after a 25-year-old female passenger became agitated and tried to open the cabin door mid-flight, the British discount carrier confirmed Sunday on its website.
“In their rush to escort the aircraft, which was supposed to be heading from London Stansted to Dalaman but had returned to base because of this appalling and dangerous behaviour, the fighter jets created a sonic boom, which could be heard for miles around,” the airline noted.

“Our aircraft landed safely at London Stansted Airport, where airport police boarded to arrest a 25-year-old woman on suspicion of assault and endangering an aircraft,” the Jet2 statement continued. “We are now liaising with the relevant authorities to support their investigation, and we will not hesitate to prosecute.”

According to a tweet from passenger @AmiyVarol, the incident happened about 45 minutes into the flight.

“So I get on a plane to turkey after being in the air for 45 mins some drunk lady (may be on drugs too) attacks the cabin crew and then tried to open the airplane door!! 6 people are holding her down, she’s screaming biting people and now she’s in a seat being held down.”
Varol said she finally made it to Turkey Sunday.

“For years we have been highlighting just how serious the consequences of disruptive passenger behaviour can be,” the airline said. “These consequences include huge fines, lifetime bans and court action. They now also include the authorities having to scramble fighter jets to escort commercial aircraft, proof that this behaviour must stop now.”