Fire on Greek ferry forces it to return 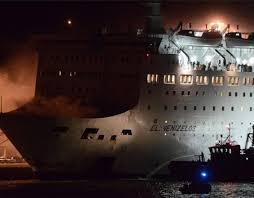 ATHENS: The Greek coast guard said on Wednesday, a passenger ferry with 1,016 people onboard is returning to the port of Piraeus after a fire broke out while the vessel was en route to Chania, on the island of Crete.
There were no immediate reports of injuries, a coast guard official said.
The Eleftherios Venizelos ship, with 875 passengers and 141 crew, was sailing off the island of Hydra, when it notified the coast guard that a car parking compartment caught fire around midnight.
However, the situation is not worrying and the ferry is expected to dock at Piraeus in about 10 minutes, the official added.