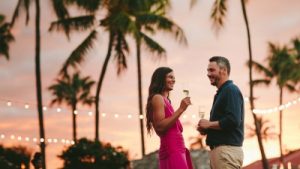 “This event is exciting and unique, as it brings wine and food lovers together with winery owners, winemakers and winery dignitaries from around the world to spend three days together eating, drinking, and sharing paradise at Four Seasons Resort Maui, which has become one of the world’s leading wine destinations,” says Navarro, who has curated a list of nearly 30 preeminent wine producers. Headliners include Dom Pérignon, Krug, Opus One, Château Cos d’Estournel, Colgin, Harlan Estate, Biondi Santi, Maison Louis Jadot, Billecart-Salmon and many more. Acclaimed spirit producers Louis XIII and Casa Dragones will also join the weekend.

Wine tastings feature lively discussion moderated by sommeliers, rare vintages and sunset views. Guests choose from one of the following:

Intimate under-the-stars dinners feature one of the top wineries in the world and a visiting celebrity chef. Following dinner, guests will enjoy access to an exclusive After Party at the Resort’s famed Serenity Pool featuring spectacular desserts by Four Seasons Maui Executive Pastry Chef Bruce Trouyet and Casa Dragones after-dinner cocktails crafted by the Resort’s Master Mixologist Ben Yabrow. Guests choose from one of the following: