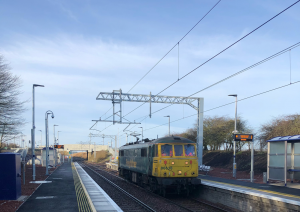 Network Rail achieved a key milestone on the Shotts Line electrification project on Sunday when the first electric train ran on the route.

The train a Class 86 electric locomotive, completed a number of test runs; including at line speed, along the newly electrified sections between Holytown and Midcalder junctions – creating the fifth electrified route between Scotland’s two main cities.

A central part of the Scottish Government’s rail strategy, electrification has the potential to transform the passenger experience on the line reducing journey times and adding capacity, on comfortable, efficient and more reliable electric trains.

Across the project, the team have worked circa 1.2 million hours to install 2,500 tonnes of steel masts that have been erected to carry the 223 kilometres of wires that have been run on the route to electrify the line – while major modifications have also been carried out at 17 bridges along the route to create enough space for the new overhead lines.

Successfully running the first electric train on the line is the culmination of a project which has been four years in delivery to upgrade the line through North Lanarkshire and West Lothian.

Delivered ahead of programme, the £160m Scottish Government-funded project will enable:

• The introduction of modern, electric trains which will offer a better travelling experience for the public.

• More seats on services between Glasgow Central and Edinburgh.

• A reduction of noise and better air quality for those who live and work near the railway.

Brian Mallon, project manager for the Shotts Line electrification, said: “Successfully running this first electric train on the line is a great achievement for everyone associated with the project and it brings us a step closer to being able to introduce electric services for customers.

“Electrification will transform travel across the central belt of Scotland – increasing the number of seats, reducing journey times and cutting emissions by introducing more modern and greener trains to the route.”

While the electrification of the line is now complete, work on the project is ongoing on station platforms and to create step free access at a number of stations,

The Shotts Line project remains on track to complete by the end of March.