In the first half of 2019, Malaysia experienced a positive growth in tourism 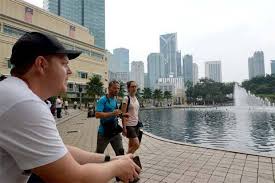 In the first half of 2019, Malaysia experienced a positive growth in tourism, boosted by huge international tourist arrivals.

“Per capita expenditure for the period of January to September also grew by 3.1 per cent from RM3, 190.5 to RM3,289.3,” he said today declaring the third quarter performance of tourism.

Mohamaddin said that the short haul market had kept its position as the biggest contributor of tourists to Malaysia with a share of 68.7 per cent.

“The highest per capita according to market distance saw Saudi Arabia recording the most for long haul at RM11,394.4; China at RM5,301.5 for medium haul and Vietnam at RM3,356.3 for short haul.”

Also, the minister stated that the haze which had masked Malaysia and adjoining countries such as Singapore, Thailand and Brunei had impacted the momentum of tourist arrivals.
“I believe the tourist arrivals could be better without the haze.”