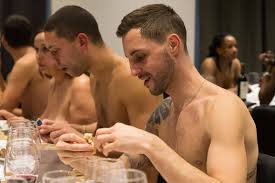 Owners of O’ naturel , Paris’ first nudist restaurant announced that it will close down next month. Due to lack of customers the city’s 12th arrondissement opened in November 2017 will close its doors.

The concept was launched by Mike and Stephane Saada, 43-year-old twins who were not nudist themselves.

O’naturel was designed to offer the pleasure of dining naked all year in the capital considering the naturist values and it was unlike the nudist beaches which only attracted naturists during summer.

Responding on the closure the owners said that they will remember the good times, meeting beautiful people and customers with whom they shared exceptional moments.

The guests were guided into the changing room on arrival, here there could keep their clothes, mobile phones and cameras. They were even provided with a  pair of slippers and women had the option of leaving their heels.

Those who wanted to try there was no restriction and President of the French Naturist Federation, Yves Leclerc, said when  O’naturel first opened he said that it is  like when we’re on holiday, but it’s even better.

There were complaints though that the presence of clothed waiter did not go with the spirit of a nudist restaurant.Dishes such as foie gras, rack of lamb and crème brûlée were available and it served the classic French cuisine.

Stephane went on saying that there was a strict code of conduct that mentioned nudity was wholly platonic. They could reject someone or explain those looking to hook up to go somewhere else.

The restaurant could not sustain much even though France’s reported 2.7 million practicing naturists.

However it lasted for longer time than the London’s only nude restaurant, The Bunvadi which was admittedly a pop-up venture.