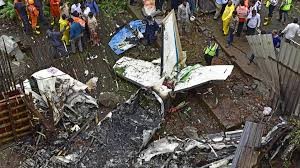 In a tragic incident, five people were killed and two injured as a chartered plane crashed in an open area in Mumbai’s Ghatkopar area Thursday afternoon.

The four people on board who died in the crash have been identified as Captain PS Rajput, co-pilot Maria Zuberi, assistant maintenance engineer Surbhi and air technician Manish Panday. The identity of the pedestrian who was killed in the crash has not been ascertained.

The two injured are identified as Lavkush Kumar and Naresh Kumar Nishad.

The 12-seater King Air C 90 aircraft (VT- UPZ) went off the radar and lost contact with the ATC just 15 seconds before the crash.

It had informed the ATC that the flight had developed huge technical fault and it had to be grounded immediately. The ATC was informed and it was against the normal flight path.
Such aircraft and joyride helicopters operate from Juhu airport. The 12-seater aircraft was to land at Juhu airport.

The plane also lost its original landing path and got diverted by over 20 to 30 degrees. It seems that after losing control of the aircraft, the pilot tried crash landing it at the Mumbai airport which was just a mile away but they couldn’t make it and crashed at Ghatkopar.

The pilot saved many lives by sacrificing his own life and because of his brave decision, the plane crashed at the under construction site.

Twitter Ads info and privacy
The plane crashed at Old Malik Estate near the telephone exchange on Jeev Saya Lane in Ghatkopar.