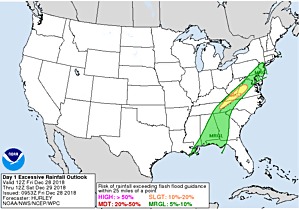 The National Weather Service’s office in Peachtree City issued a preemptive flash flood watch for northern and central Georgia that will remain in effect until Saturday morning.

As storms will move through the area, residents across Gwinnett County and the rest of northern and central Georgia will have to be on the lookout for potential flash flooding.

The weather service said that soil conditions were moist and the river levels were high across the area. Significant runoff and flooding of creeks and rivers will occur even due to a relatively small amount of rainfall.

High water will persist for several days even after the rain ends. There will be light rainfall in the beginning that will build up to heavy by Friday. As per the forecasters a significant amount of raim will fall in the region through Saturday morning.

According to the graphic released by the local weather service shows that the Gwinnett area may get 1.5 to 2 inches of rain by Friday night.

Officials said that this will be the first round of rain that will impact the area through the weekend into early next week.

There will be three rounds of rain in the area by the middle of next week after Thursday and Friday, a second round will occur on Saturday through Sunday while the third will be on Monday morning through Tuesday night having moderate accumulation of rainfall.
In the north metro Atlanta area the weather services predicted 4 to 6 inches of rain to fall by Tuesday night.

The forecast said that beyond Friday there will be additional rounds of rain occurring through next Tuesday. Around 3 to 6 inches of total rainfall is expected in the areas with higher amounts possible.

Then river and stream flood threat will increase once again and the ground will be wet from recent rains.