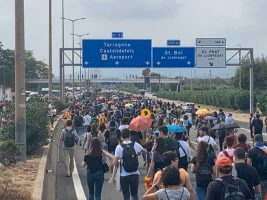 Dozens of flights were cancelled or delayed at Barcelona Airport on Tuesday following massive protests in Spain’s Catalonia region over the jailing of the nine separatist Catalan leaders by the Spanish Supreme Court.

Altogether 45 flights were scrapped and passengers had to stay at the airport as the protests on Monday caused many flight cancellations falling through on Tuesday. On normal days, around 1,000 flights operate from the airport for various destinations. Barcelona Airport is the second largest airport in Spain.

The protesters assembled at the airport and also blocked roads in a bid to bring all operations to a standstill.

That there were little infrastructural damage and the protesters couldn’t manage to get inside the terminal, he confirmed.

The airlines, however, have not commented on the economic effect and the number of passengers affected due to the protest yet.

Aena said that no cancellation or delay of flights was planned for Wednesday.

The passengers were found struggling at Barcelona Airport on Tuesday as there were huge queues for check-in and everything. Travellers had to struggle even for charging their phones.

Many passengers shared their plight on social media. One travelled complained about the huge queues at the airport and mentioned that baggage check-in was not working and no was working at the check-in desks.

The traveller also shared a video of chaos in the airport.