Florida to have guitar shaped hotel 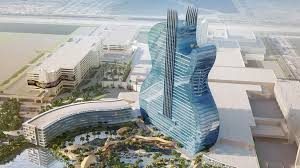 After having robot hotels, hotels built underground and some shaped like dogs, it is time to look forward to a guitar shaped hotel.

Seminole Hotel & Casino Hollywood in Southern Florida will open its $1.5bn (£1.2bn) guitar-shaped expansion, with Maroon 5 as the opening act during this autumn.

The 137-metre-high hotel will house 638 rooms and suites designed to resemble back-to-back guitars which will open on October 24.

Architects Klai Juba Wald designed the guitar expansion with interiors by David Rockwell. There will be focus on live music with a new venue called Hard Rock Live.

There will be a recreational waterscape spread across 13.5 acres, new spa, shops and meeting space. There will be 3,000 slot machines and views across Southern Florida with floor to ceiling glass windows in every room.

Jim Allen, CEO of Hard Rock, said that they want to build something special.The hotel has been described as an architectural marvel and will redefine the South Florida skyline.