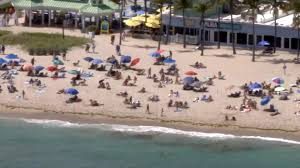 Florida has opened some of its beaches and parks, while other states like Texas and Minnesota unveiled their own tourism revival plans for the coming days. Govornor  Ron DeSantis’ announced on Friday that north Florida beaches became among the first to allow beach-goers to return since the closures.

The global pandemic COVID 19 has infected at more than 2.2 million people around the world, and officials and experts are questioning how seriously official counts may be understating the dimensions of the disaster.

China acknowledged that the number of fatalities in the one-time epicentre city of Wuhan was nearly 50 per cent higher than reported. Meanwhile, in Italy, Spain, Britain, the United States and elsewhere, governments revised their death tolls or openly questioned their accuracy.

Barcelona University epidemiologist Antoni Trilla, who heads the Spanish government’s expert panel on the crisis said that they are probably only seeing the tip of the iceberg.

The authorities say infections and deaths have been under-reported almost everywhere. Thousands have died with Covid-19 symptoms – many in nursing homes, which have been ravaged by a disease that hits the elderly the hardest – without being tested.

The World Health Organisation said on Friday that many countries were likely to follow China in revising up their death tolls once they start getting the coronavirus crisis under control. Four months into the outbreak, nations are still struggling to increase their testing capacity, and many are still far from their goal.

In Italy, officials have acknowledged that the country’s official death toll of more than 22,000 understates the true number, primarily because it does not include those who died in nursing homes and were not tested.