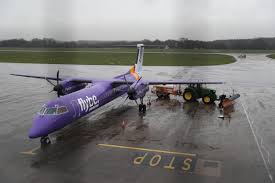 The tourism industry of Northern Ireland has been “plunged into crisis” by the fall down of Flybe.

The airline, which accounts for about 80% of carriers from Belfast City Airport, in the early hours of Thursday, it went into administration.

Joanne Stuart from the NI Tourism Alliance explained that the loss of Flybe will “further compound” the problems the sector is going through due to coronavirus.

“Firstly our sympathy goes out to all the Flybe staff and to their passengers who have been affected, but immediate action to support airlines flying into Belfast is critical,” she said.

Ms. Stuart stated that tourism is a £1bn contributor to the economy and provides job to more than 65,000 people.

She said: “If we don’t have urgent government support for regional air transport, the consequences for the entire Northern Ireland economy, not just tourism, will be incalculable.”

For the hospitality sector, Colin Neill from Hospitality Ulster added that the fall down of Flybe is “devastating”

“The regional connectivity that Flybe offered was vitally important to tourism and our wider hospitality sector here, without it there will be a huge impact on visitor access,” he said.

“The knock-on effect of fewer visitors and tourists means that this sounds alarm for our pubs, restaurants and hotels at a time when coronavirus is compounding the sector’s problems.”

In the meantime, Retail NI requested for support from the Government “at all levels” for the airport.

Glyn Roberts said: “While Flybe going into administration is clearly bad news for Northern Ireland’s air connectivity and our economy in the short term, I am confident that Belfast City Airport will find new carriers for these vital air routes across the UK.”

“Tourists and business travellers who use Belfast City Airport are important customers for our retail sector in Belfast City Centre and across Northern Ireland.”

Belfast City Airport has explained it is in discussion with “a number of carriers” in regards to the routes.

Scottish airline Loganair has declared it has stepped in to protect 16 routes previously operated by Flybe – including two in and out of Belfast.