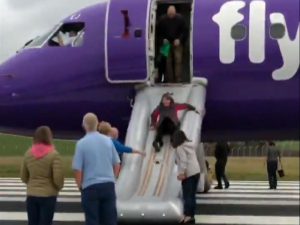 After the engine made a loud noise and the Flybe cabin was full of smoked, the flight was evacuated at Exeter Airport where more than 100 passengers and five cabin crew had to flee from the aircraft.

They used the inflatable slides after the incident in the flight BE$321 which was due to depart from Alicante in Spain in the morming. However, the take-off was aborted after it was found that the air in the cabin of Embrarer jet was getting ‘hazy’.

Passengers evacuated via the slides and there were two fire engines at the scene.

The airlines mentioned in a statement that the flight experienced haze in the cabin just before the take off.

So far all 100 passengers and five crew members were evacuated from the aircraft safely and the airline’s crew took necessary precautionary measures.

The situation was taken very seriously and their immediate concern was the safety and welfare of those involved.

By 8 am all the passengers had to return to the airport terminal by 8am and the runway was closed for an hour.

One of the passengers stated that the engine made a loud banging noise and the cabin was filled up with smoke.

There was a replacement aircraft and the flight was rescheduled to depart from Exeter at 12:35 pm.