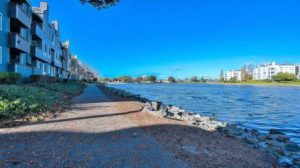 The latest update on an upcoming Foster City hotel proposal has added 2 rooms, 61 parking spaces, and one-story for a total of seven stories. The changes have been made since the proposal was last reviewed by city officials sometime last year.

Earlier this month, planning commissioners welcomed the increased height alongside the proposed design of the building in a meeting. They concluded that nearly all concerns mentioned in the past regarding the aesthetic of the hotel have been resolved.

The latest changes in the proposed seven-story hotel are 83,187 square feet and feature accommodation of 156 guest rooms. The property will also offer a total of 141 parking spaces. According to the latest proposal put forth by applicant and Foster City resident Lance Sorensen of MPQ Investment Management a two-story, 80-stall parking structure has been replaced by surface parking. The currently proposed parking is seven stalls below the standard code requirement. However, it is more than enough if a 10% parking reduction is granted by the council.

The new plans include meeting rooms as well as a restaurant. Additionally, there is a 400 square feet low key bar with 30 seats on the top floor that can only be accessed by the guests. The bar will offer striking views of the San Mateo-Hayward Bridge. An additional rooftop deck will also be accessible from the bar.

Lance Sorenson mentioned in a statement that the bar could open for the public one day if parking demand decreases. But currently, the plans are not equipped with sufficient parking to do so. The latest plans have also relocated the bar to the side of the building and now it faces Costco to eliminate light and sound impacts to neighbors.

The affiliation of the new hotel is still at an uncertain stage. It can be associated with the Marriott brand AC hotels but could also become part of the Hyatt or Hilton franchises instead.

Sorenson also informed at past meetings that the hotel has the capability to generate as much as $1 million annually in hotel tax revenue. It also expected to raise $400,000 annually in property tax revenue.