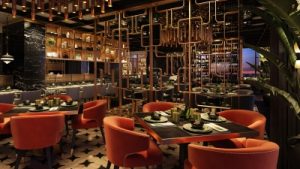 Four Seasons Hotel Bengaluru at Embassy ONE has unveiled its much-awaited Asian brasserie, Far & East. This innovative and design-led space will be known for its authentic flavours of Thai, Chinese and Japanese cuisine served with an inventive twist.

Background:  Located on the 21st floor of the Hotel, this chic restaurant has been designed by LW Design, with offices in Dubai, London and Sao Paulo, and who have some very modern projects to their name. (The entire Hotel is designed by Yabu Pushelberg and is elegant and subtle. Level 21 has a different designer, LW Design, to give it a distinctly different look and feel.) The Far East is a geographical term that usually refers to East Asia. It evokes a sense of mystery and is charming and exotic. Far & East is a play on this and is designed as a place that has a certain quirky and exotic appeal.

Design Style: Strikingly bold and stylish, the restaurant immediately makes a mark as an extraordinary dining outlet. Quirky elements – black monkeys with leaves and branches, bright green leaf patterned upholstery, brass snakes, bold tangerine-coloured plush sofas, rich textures and materials and a play of black and gold all lend a sense of place that is unmistakably chic.  There is a touch of whimsy, and immediately one is transported to an exotic land in the far East.

A stylish trendsetter in the city for modern dining, Far & East presents Japanese, Thai and Chinese with a flair. While there is plenty to see, eat and experience what with the glorious views of the bustling Bangalore city suburbs, perhaps the greatest work of art on display is the carefully articulated menu. There are three private dining rooms for 10, 10 and 14 guests in which guests can entertain themselves and a beautiful sit-out overlooks the cityscape of Bengaluru, replete with lush green treetops.

The restaurant is not only about the stylish design, but the food aims to be the heart and soul with captivating flavours of the East.

On a closer look, the menu at Far & East has some dishes in the native (Japanese and Thai) languages – such as ruam (means a collection in Thai) and ebi and maguro. If one didn’t know that means shrimp and tuna in Japanese, there’s the chance to engage with the servers. This has been done intentionally to create more engagement with the teams.

Flaming Duck and other elements

There will be certain elements such as the Flaming Duck, carved at the table with flair, served with a bouquet of homemade dips and condiments. Other traditional elements such as dim-sums will be the highlight. Funky sushi and rolls will be an interpretation of these beloved Japanese offerings and the Volcano Maki is torched tableside to create a flourish and fanfare of sorts. Fragrant Asian cocktails will be in the spotlight at the bar.

Since no meal can end without the ritualistic sweet ending, the desserts have been crafted not just to soothe cravings or elicit a gasp but also create the perfect Instagrammable moment.

The Chocolate Pear is a good place to start as it looks exactly like a real pear but in reality is a dark chocolate casing of the most decadent pear compote lightly infused with a vivacious five spice mix, an integral element of Chinese cuisine.

However, what really takes the cake is the flourish with which the Floating Dessert is presented. In style, and straight from the streets of Hanoi perhaps, a server comes in carrying on his shoulder, two bamboo baskets on a pole. Amid a haze of ice cold smoke, one is presented with an assortment of Asian-inspired mignardises. These little bite-size desserts are an Asian take on petit fours. There are four variants – one is a matcha opera of a matcha te- infused twist on the beloved classic, another is a Thai chai custard, a black sesame and praline choux pastry, and a zesty yuzu crémeux dessert made to resemble a real yuzu (a variety of Chinese mandarin), leaf and all.

The Culinary Team: Two chefs will add their signature touches, enthralling diners with their bold strokes – Chef Atsushi Yonaha giving the Japanese food items a signature twist and Chef Leong Then who is a master craftsman at the wok and a Four Seasons brand ambassador for nearly a decade and half, having done successful stints at Seychelles, Singapore, St. Petersburg, Doha and Mumbai, where he won many hearts at the beloved San:Qi when it opened.

Executive Chef Stephane Calvet continues to oversee the culinary brigade, bringing to the stage his decade-long experience in Thailand. In his last assignment, Chef Stephane was in Chiang Mai where he explored the depths of Northern Thailand on his motorbike, forging friendships with farmers and artisans, learning numerous Thai culinary secrets along the way.

Art: An endearing line of “Fat Ladies” artwork punctuates the space with a touch of flamboyance.

The emergence of the “Court Fat Lady” first made its appearance under the Zhou Dynasty, which briefly interrupted the Tang Dynasty. The image of a flamboyant woman was relaunched as one that changed from waif thin to luxuriously plump and curvaceous. This image was represented in art and poetry and became a stylish order of the day. It is believed that the most famous court lady, Yang Guifei, the consort of Emperor Xuanzong (r.712-756) set the fashion for ladies of ample form. Fashion and apparel fell in step with Yang’s fulsome, mature figure and for the first time, long, loose-fitting robes with high necklines became court fashion accompanied by elaborate hairstyles. Yang’s influence impacted generations in style and beauty and became a celebrated art form.

The “Fat Lady” is the sculptural embodiment of celebrated beauty. These examples of a “Fat Court Lady” embody the typical Tang style. Her ample form with rounded, rosy cheeks and curved stomach matched with a non-inhibited sense of abandon make a striking style statement. Her alluring, yet elegant figure, the loose and unconfined hair paired with a non-conformist style of smoking a cigarette or sipping on a martini is a modern interpretation of the breaking of the mould in terms of feminine beauty.

These redesigned artworks befittingly add to the unique charm of Far & East.