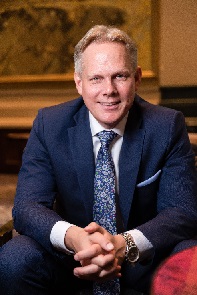 Fredrik Blomqvist is the General Manager of Four Seasons Hotel Bengaluru scheduled to open in the ‘Silicon Valley of India’ in the latter part of 2018. Helming the pre-opening team of this much anticipated Four Seasons property in the Indian subcontinent, he is excitedly looking at positioning this uber luxury destination as a futuristic hub in the city of Bangalore

The project is strategically located between the Central Business District and the Bengaluru International Airport and comprises a 230 keys hotel, 110 branded luxury residences, more than 50,000 sq. feet of retail space and a premium office tower. An energised culinary scene encompasses a host of 6 Food & Beverage outlets and a recurring dialogue between architecture and nature throughout the spaces, is an homage to the Garden City

Four Seasons Hotel Bengaluru will be the pivot of Embassy ONE, a destination hub of shopping, business and residences in the dynamic city of Bengaluru embodying the essence of ‘modern luxury’

Fredrik is a true ambassador and Four Seasons veteran. He has worked with Four Seasons across the globe – Dublin, Philadelphia, Guangzhou, Chiang Mai, Jakarta, Shanghai and now Bangalore.

Fredrik arrived in early 2018 to the vibrant Indian city of Bengaluru where he is currently overseeing the dynamic pre-opening functions that are making rapid strokes at the Four Seasons Hotel Bengaluru.

“We are very fortunate that the Four Seasons brand and the service we provide are one and the same. We’re opening the doors with the highest expectations of any hotel. Our intuitive and unscripted service is how we build upon that.” remarks the front runner of one of the most anticipated luxury Hotel opening in India.

Drawing upon his Swiss Hotel Management education and more than two decades of International Hotel experience, Fredrik characterises his management style as very straightforward, approachable and inspiring. He likes to have fun, he says, “but I expect everyone to try their utmost and work very hard to make sure all of our guests are very well looked after.” The key to success, then, is “focusing on what we can achieve as a team. I do that myself, and I like that from the team as well.”

Fredrik considers himself a global citizen. He speaks various languages: English, Swedish, Spanish and German, but considers the language of empathy to be key when interacting with guests, firmly guided by the Golden Rule of Four Seasons “Treat others the same way as you wish to be treated.”

Born and raised in Uppsala, Sweden, Fredrik is a Viking at heart and a true family man who has made this wonderful city of Bangalore his new home with his lovely wife and their ten-year-old son.