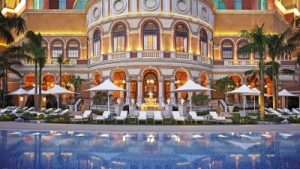 Four Seasons Hotel Macao has recently been named among China’s Top 50 Hotels by the prestigious Voyage Magazine at its annual awards ceremony. The Hotel, opened in 2008, was one of only 15 hotels within China to have achieved the Two Diamond accolade under the China’s Top 50 Hotels category, and is the only non-gaming luxury hotel in Macau to have garnered this recognition.

“Being the only non-gaming hotel in Macau to be named as one of China’s 50 Top Hotels is a remarkable achievement. I want to congratulate and thank each and every staff member at Four Seasons Hotel Macao for their dedication and relentless pursuit of excellence in all facets of our daily operation,” says Vikram Reddy, Regional Vice President and General Manager of Four Seasons Hotel Macao. “Our manifold experiences at the Hotel are made possible with the passion and energy from the men and women who make their work as more than just a job, and we hope that all our guests will be able to feel that extra personal touch in our renowned Four Seasons service.”

The 2019 Voyage Awards Ceremony took place in Beijing in December, which also marks the 15th anniversary of the Magazine’s debut in China.