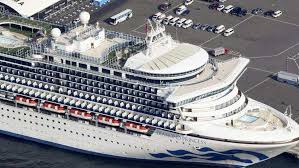 As Japan vowed to initiate new measures to fight the outbreak a fourth passenger has died after becoming ill aboard a coronavirus-stricken cruise ship, local media reported on Tuesday (Feb 25).

Nearly 700 people on board the Diamond Princess, which spent two weeks quarantined off Japan, have so far tested positive for the virus.

Four people who were hospitalised after being taken off the ship have died, the latest a man in his 80s, according to local media.

The Yomiuri Shimbun daily said the man had tested positive for the new coronavirus and died of pneumonia. The health ministry declined to comment on the reports.

Three others, all Japanese, have so far died after becoming sick on the ship. Two were confirmed to have the new coronavirus, while the health ministry declined to comment on the diagnosis of the third.

Japan has come under increasing pressure over its handling of the ship, particularly after it emerged that some passengers allowed to disembark after testing negative were subsequently diagnosed with the virus.

Some of the disembarking passengers were not even tested during the quarantine period, the health ministry has acknowledged.

Several government officials working on the ship have themselves contracted the infection but authorities have defended a policy of not uniformly testing those working on the boat.

“We are aware of the risks of them getting infected when they take off a mask or gloves, so we will have thorough measures to prevent infections under these circumstances,” Health Minister Katsunobu Kato said, while stressing no change in policy was planned.

Many nations have evacuated their citizens from the ship, with 450 Filipinos due to be flown home on Tuesday on two chartered flights. Another 81 who have tested positive for the virus will stay in Japan.

As the situation on the ship has come under scrutiny, infections have spiked inside Japan, with 156 cases including one death.

“We are seeing in several areas in our country the sporadic emergence of patients whose routes of infection remain unclear and there are some clusters of patients,” Kato said.

“Now is a truly important time in order to control infection in Japan.”

The government unveiled on Tuesday various measures intended to slow the spread of the virus, including expanding the number of hospitals that can receive suspected patients and asking people with moderate symptoms to stay at home.

The health minister has already urged people to avoid crowds and unnecessary gatherings, and the government is calling for businesses to encourage teleworking and off-peak commuting.

Experts are also being dispatched to Hokkaido, where the governor has warned he fears a cluster of infections.

But the government has brushed aside worries about the Olympics, which Tokyo hosts this summer.