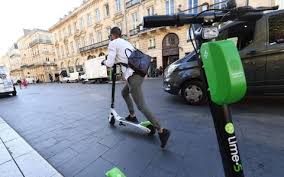 France is going to ban electric scooters from pavements following a rise in accidents and increasing complaints over the number of the devices littering the streets. An estimated, there are more than 15,000 scooters operated by several rental companies have flooded Paris since their introduction last year, with the number expected to rise to 40,000 by the end of 2019.

In an interview for Le Parsien, France’s transport minister Elisabeth Borne said that anyone riding an electric scooter on the pavement would be fined €135 from the month of September. Instead, they will have to use the street or dedicated cycling paths “so pedestrians are no longer squeezed against walls”.

She also added that the introduction of the electric scooters in France had happened very fast and in a bit of an anarchic way. And it is true that they are seeing an increase in accidents and but also an increasing sense of unease on their pavements.

Electric scooter rental services from companies such as Lime, Bird and Uber offshoot Jump have arrived in many cities across Europe over the past year. The riders use an app to find the closest scooter before leaving it in a designated parking space.

But most of the critics say that they are often scattered on the pavement and in public spaces, rather than parked in designated spots. Now the questions have also been raised over the safety of the scooters, which can exceed 30mph.

More than 1,500 people have been treated for injuries from using battery-powered electric scooters in the United States since 2017. Paris mayor Anne Hidalgo already announced that the measures to protect pedestrians from electric scooters last month. She tweeted that pavements are “for pedestrians only”.