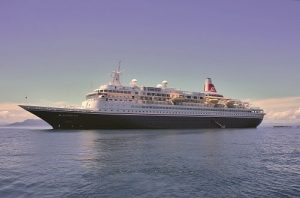 Fred. Olsen Cruise Lines is proud to be working with the Royal British Legion to offer a ‘Voyage of Remembrance’ for Normandy veterans, to commemorate the 75th anniversary of D-Day. The Royal British Legion has chartered Fred. Olsen’s 880-guest ship Boudicca for the voyage, which will take up to 300 veterans, plus a relative or carer, to a series of commemorative events in both England and France.

The voyage will set sail from Dover on 2nd June 2019 and will head to Dunkirk, France, before calling into Poole and Portsmouth in England for commemorative events. From there,Boudiccawill follow the same route as those involved in the Battle of Normandy, travelling to Le Havre, France, on 6th June 2019, exactly 75 years after the D-Day Landings.

“We feel honoured to be part of the Royal British Legion’s commemorations, marking the 75th anniversary of the D-Day Landings and the Battle of Normandy, in what is set to be a very poignant and moving voyage for these veterans and their loved ones.

“The voyage will follow the same path as the ships involved on this momentous day, andBoudiccawill provide a comfortable setting in which to retrace those important steps, which brought peace and reconciliation to mark the Second World War.”

“Seventy five years ago, the largest seaborne invasion force in history set sail for France on a mission to liberate Europe. Alongside their American cousins, nearly 160,000 men from Britain and the Commonwealth landed on the beaches of Normandy.

“Today, we stand in awe of their achievement and salute their bravery and sacrifice. We invite any of them who wish to attend the events to commemorate their achievements to get in touch with the Legion and join our journey back to Normandy.”

The voyage will be free to veterans and their companions, funded by the Royal British Legion’s LIBOR grant, in conjunction with the Ministry of Defence and Arena Travel. Anyone wishing to join the sailing should contact the Royal British Legion to request an application form, which must be completed and returned by 4th February 2019.