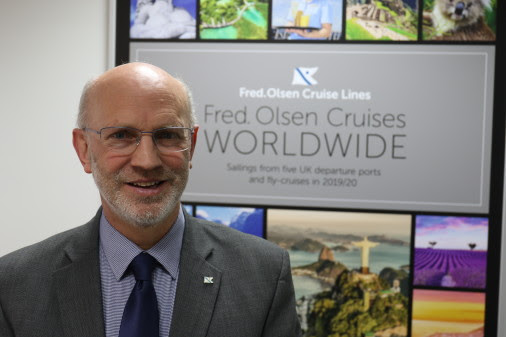 Fred. Olsen Cruise Lines’ Managing Director, Mike Rodwell, has announced that he is to retire at the end of August 2019, following 15 years in the role and 31 years with the Fred. Olsen companies.

Mike has worked across a number of the Fred. Olsen businesses since he joined the group in 1987, with his first role as accountant for Fred. Olsen’s first-ever designated cruise ship, Black Prince.

It was then that Mike became Commercial Director, a role that he held for eight-and-a-half years, before he was promoted to Managing Director of the cruise line in 2004.

“After a great deal of thought, I have taken the decision to retire at the end of August 2019, shortly after my 60th birthday. It has certainly not been an easy decision, and one that I have not taken lightly.

“In my time with Fred. Olsen, I have worked in a number of varied roles and have seen the Cruise Lines enterprise grow from humble beginnings and with only one ship, to the hugely successful operation that it is now, with four ocean ships, our new river ship Brabant and a customer base that continues to expand, despite the market being more competitive than ever.

“I would like to thank all of the many people whom, perhaps without even realising, have made my long career with Fred. Olsen such an enjoyable one. I will look back at those 30 plus years with immense pride at all we have achieved together, and I know I will miss it.”

“Mike has been an integral part of the success of Fred. Olsen Cruise Lines for the last 30 years. In his time as Managing Director, he has been key in developing our unique style of cruising, which has placed us in such a strong position for the future growth of the business.

“Having worked very closely with Mike over the years, I will miss his wise counsel and good humour. Everyone at Fred. Olsen wishes him the very best for the next stage of his life.”

Mike lives in Colchester, Essex, with his wife, and has three grown-up children.

The process to appoint a new Managing Director at Fred. Olsen Cruise Lines is currently under way.